1. The advantages of animal artificial insemination

Taking sheep as an example, one of the biggest advantages of sheep artificial insemination technology is that it has greatly improved the utilization rate of Rams, reduced the number of Rams raised, reduced the cost of raising and the purchase cost of excellent Rams, and enabled the quality of sheep to be rapidly improved. The second is that the RAM's semen can be easily transported, and it can be replanted in different places. It can quickly expand the range of mating radiation of excellent Rams and improve the promotion of fine varieties. Third, before artificial insemination, the semen quality of the RAM has been strictly tested to ensure and improve the rate of gestation of ewes. Fourth, artificial insemination avoids direct contact between Rams and ewes and prevents cross-infection and spread of some diseases.

Adult boars are harvested 2-3 times a week under normal conditions. If the boar is first harvested or has not been used for a long time, the semen collected for the first time should be abandoned. Sows are multi-cycle estrus livestock. On average, estrus occurs once in 21 days. Estrus can be planted all year round. Ovulation usually occurs 24-48 hours after estrus begins. The appropriate time for insemination is 2-3 hours before ovulation of the sow., Can lose sperm after 3 to 5 o'clock after sow hospitality. After the first insemination, 12-24 hours, and once again, the sow can always have energetic sperm waiting for the arrival of the egg at the fertilization site during the ovulation stage. In the breeding of commercial pigs, two different breeds of boars semen were also mixed with insemination, which could increase the rate of breeding, breeding rate and the vitality of offspring. 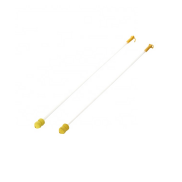 The amount of sperm lost is generally not less than 40-50 ML, and the number of sperm contained in each dose should be 5-10 billion. Before insemination, 800 units of chorionic gonadotropin were injected into sows to promote ovulation in sow. In the process of insemination, it should be carefully operated, the insemination equipment should be sterilized, and the use of alcohol disinfection should be used after volatilization. Boars need to wash their foreskin and Glans before they are refined, and the operating environment should be clean and hygienic. The air is good, and they do not smoke when they are refined and refined. The temperature of contact with semen is the same as the temperature of semen. Second, you must be skilled in operating correctly. The tapered vasectomy must be inserted into the second wrinkle wall of the cervix. The bulging vasculature must be at the outside of the son's neck to be able to deliver fine. At the same time as the infusion, there is a rhythm to pinch the sow clitoris, hands hold the sow waist. Do not feed sows immediately after insemination. Ingredients generally use a disposable deep intra catheter.